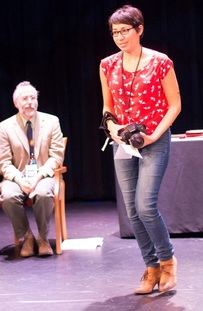 Photo by Susan Shaffer
The KCACTF Latino Playwriting  Award desires to stimulate the voices of young Latino playwrights in America.  The award will be presented to the author of the outstanding Latino student-written play participating in KCACTF.

The play must be produced by a college or university or publicly presented in a “rehearsed” or “staged reading” format following a significant development process.  The must comply with the guidelines for scripts entered in the KCACTF Michael Kanin Playwriting Program.

For other questions, refer to Rules and Procedures for the Michael Kanin Playwriting Awards Program.

2013    No Comas by J. Isabel Salazar, California Institute of the Arts

2012    Casualties of Dreams and Sand by Christina Hjelm, University of New Mexico

2006    Things Behind the Moon by Marco Ramirez, New York University