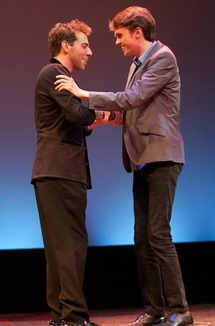 photo by Susan Shaffer
The Mark Twain Scholarship for Comic Performance
The Mark Twain Comedy Acting Award will be presented to an Irene Ryan Acting Award national finalists each spring. A cash award of $2,000 will be given for the best comic performance in the National Irene Ryan Evening of Scenes. Founded  in 1999 and supported by Comedy Central, Inc. the award has as its primary goal  to foster the finest in comic acting on the national level.

Located on the campus of Williams College in the Berkshire hills of northwestern Massachusetts, the Williamstown Theatre Festival has acquired a national reputation for the artists it attracts and the gifted young actors, designers and directors it sends out into the world. Over 2,000 individuals have completed the Williamstown Theatre Festival’s Apprentice Workshop. Santo   Loquasto, Kate Hudson, Christopher Reeve, Sigourney Weaver and Jennifer Jason Leigh all started their careers as WTF apprentices.

Apprentices alternate workshop classes and rotating production assignments. The apprentice will take intensive courses in acting, voice and movement, present scenes in progress and attend special seminars with guest and resident artists in acting, design, directing and playwriting. The apprentices also work in the theater’s scenes shop, publicity department, box office, production, administration and costumes. In eleven weeks, the apprentice will gain a thorough first-hand knowledge of the operation of a first-class professional theater.

The Dell'Arte International School of Physical Theatre Training Program/Mad River Festival Scholarship
KCACTF is delighted to offer the Dell'Arte/Mad River Festival Fellowship to be awarded to an Irene Ryan national finalist or partner. Dell'Arte International is a unique organization devoted to the art of the actor/creator and to the development of Theatre of Place. Dell'Arte, located in Pacific redwood region of Northern California. Blue Lake has become an American center for the exploration, performance, training and development of physical performance, attracting students from all over the world. Fellows will take daily classes offered by resident faculty and master classes by the international guest artists in residence for the Mad River Festival.

The National Partners of the American Theatre Classical Acting Award
The National Partners American Theatre (NAPAT) is an organization of individuals and institutions dedicated to helping support the activities of the next generation of theatre artists. NAPAT is a separate organization from KCACTF; however many of our members have long-standing ties with KCACTF and each year through the mechanism of the KCACTF Festivals the Partners fund a variety of Scholarship Awards.

NAPAT believes that the best acting stems from a classical base, and this award was created to encourage and reward Excellence in Classical Acting. For purposes of this award classical selections shall be defined as dramatic material written prior to the 20th century.

The award will be a two-week, expense-paid internship at the prestigious Shaw Festival in Ontario, Canada. The recipient will have the opportunity to see  Festival productions, attend rehearsals, and work directly with directors, fight  choreographers, and other creative staff. This award is funded through  contributions by members of the National Partners and is co-sponsored by the Shaw Festival. The Shaw Festival – with a permanent company of  professional actors, directors and designers – is the only theatre in the world  specializing exclusively in plays by Bernard Shaw and his contemporaries.

Judges from both the National Partners and the Shaw Festival will select the recipient of this award from among this year's Irene Ryan Audition finalists.

The Margolis Method Summer Intensive offers a seven-day study of the performer's physicality as the basis for expression and gives the performer a muscular vocabulary with which to create physical dramatic art. Through this rigorous physical and vocal technique, performers broaden their expressive range  and garner the skills that allow them to create meaningful original theater  productions that place the actor at the center of the creative process. In a  demanding yet supportive atmosphere, this class fosters artists’ ensemble awareness and improvisational skills. Inspired by the work of Decroux, Grotowski  and Brecht, the Margolis Method reflects 25 years of research. All
classes are  taught by Kari Margolis, and are held at the Margolis Brown Theater Company's  new Historic Landmark building in Minneapolis, Minnesota.

With the physical actor at the center of the creative process, the Margolis Brown Theater Company merges other media to create a modern theater of  spectacle  and celebration that is rich in metaphor, one that grabs an audience both  emotionally and intellectually and affects them for a long time afterwards. The  Company's research centers on the dramatic force and emotion that emanates from  an actor's physicality.

Kari Margolis will serve as an Irene Ryan National Judge and will select the  two fellowship recipients.

The Actors Theatre of Louisville Apprentice Company Scholarship
Now in its 41st year, the Actors Theatre of Louisville’s Acting Apprentice Company is one of the nation’s oldest continuing pre-professional resident training companies. Each year, over 2000 young artists audition for only 22 spots in the Company. This one-of-a-kind bridge program is designed to transition recent college graduates into professional careers by teaching the practical skills necessary to be competitive in major markets, as well as methods for creating their own work. The Acting Apprentice Company performs its own five show season, apart from Actors Theatre’s mainstage season, which culminates in a specially commissioned work in the Humana Festival of New American Plays.

One National Irene Ryan Acting Scholarship Finalist or Partner will be awarded a $2500 scholarship to be a part of the Acting Apprentice Company.

The Kingsley Colton Award for Outstanding Partner
A special $500 scholarship, The Kingsley Colton Award, is also given to the actor named Best Partner. The scholarships are paid by the foundation directly to the institution of the student's choice and are not restricted to the study of theater arts. Each of the performers has chosen his or her own material and partner. Each finalist is limited to six minutes on stage.